Is Egypt Heading Towards Civil War? By Mike Giglio.

Will Violence Erupt in Egypt? By Mike Giglio. The Daily Beast, March 1, 2013.

More on Egypt and Morsi here.
Posted by Michael Kaplan at 11:59 PM

Why Public Schools Should Teach the Bible. By Roma Downey and Mark Burnett.

“The Bible” Series: An Invitation to “Change the World.” By Jim Wallis. The Huffington Post, March 8, 2013.

What the History Channel Is Getting Wrong About the Bible. By Wil Gafney. The Huffington Post, March 12, 2013.

Black Samson and White Women on the History Channel. By Wil Gafney. WilGafney.com, March 11, 2013.
Posted by Michael Kaplan at 11:56 PM

The Political Clout of the Superrich. By Chrystia Freeland.

The political clout of the superrich. By Chrystia Freeland. Reuters, March 1, 2013.

Stacked Deck: How the Dominance of Politics by the Affluent and Business Undermines Economic Mobility in America. By David Callahan and J. Mijin Cha. Demos. PDF.
Posted by Michael Kaplan at 11:37 PM

Has Obama Lost Interest in the Israel-Palestinian Conflict. By Peter Beinart.

Has Obama Lost Interest in the Israel-Palestinian Conflict. By Peter Beinart. The Daily Beast, March 1, 2013.
Posted by Michael Kaplan at 11:33 PM

Enough With This “Lost Cause” Nonsense. By Justin Green.

Universal Human Nature Is An Illusion. By Ethan Watters.

What Is Egypt? By Steven A. Cook.

As America’s new secretary of state arrives in Cairo, it’s still not clear the United States knows what it’s dealing with.

More on Egypt and Morsi here.
Posted by Michael Kaplan at 4:58 PM

Don’t Trust Anyone Over 70. By Gautam Mukunda.

Why old leaders are dangerous.
Posted by Michael Kaplan at 4:56 PM

A Republican Message for Wall Street. By Peggy Noonan.

Look at this Politico story. Republican presidential hopefuls are trooping into Wall Street, just as Democratic hopefuls do. They meet with hedge-funders, CEO’s, billionaires. They chat, charm, discuss their efforts.

Democrats can get away with it, the long trudge to Wall Street, or at least always have. They’re the party of the little guy. They can court titans—it only shows their sophistication and broadness. They’re for everybody!

But for Republicans Wall Street is poison, and again we know the reason—they’re the party of the rich. The journey makes them look like handmaidens. And to a degree they are, as the Democrats are: Big money guys impose their views, they don’t give money for nuthin’.

I don’t know what Marco Rubio said to the people he met with, but in a new Republican Party this is what he would say:

“I want you to know me, and in time I hope you’ll feel enough confidence to invest in my efforts down the road. I’d like to know you, too, because you employ a lot of people, and that contributes a lot to the economy. I respect you, and I know you have insights that would be valuable to me in the area of high finance.

“But I don’t want to fly under a false flag. I am a conservative. I am pro-capitalism, pro-economic freedom and opposed to using the power of the government to distort and flatten all our economic realities. And for those reasons—because I am a conservative and because I want capitalism to work—I intend, as president, to break up the banks. I also intend, when it comes to tax reform, to do away with the carried interest loophole that gives you preferential treatment on much of your income.

“I’m going to move forward on these things in the Senate, but I likely won’t succeed in doing them until I’m president. But I don’t want to surprise you or leave you unclear on my intentions.

“I’m going to steer this party away from Wall Street and toward what used to be called Main Street and doesn’t have a name anymore. Our economy won’t take off again until our pigsty of a tax code is cleaned up. People have to feel everyone’s being treated fairly, that the rich aren’t calling the shots and gaming the system. And all future growth could be stymied if you guys make a half-trillion-dollar wrong bet tomorrow because some trader in London was high as a kite on Ambien. That could bring down the system the way it crashed in ’08. So we have to change the system. Too big to fail is too big to live.

“You may not like these policies, and I know the reasons you won’t, but I’m asking you to watch, and consider what I’m doing. Because the big banks and carried interest are over, they won’t survive the new era. I’m going to lead the charge. I’d like to keep coming back here and telling you what I’m doing and why.

“But I’m going to win this thing in ’16, and I’m going to win in part on these issues, and I feel I can ask you to join me because I respect you enough to know you know the big bank system is looking for trouble, and carried interest is ultimately destructive. I think you know this deep down.

“You’d do a lot for your industry, and I think for the country, if you just watch and keep an open mind. Thank you. This has been a pleasure. I love the subtle play of beige tones in your office.”

That would be one great meeting! A few of the CEOs and hedge-funders, the ones who didn’t laugh, might get pretty steamed. They don’t suffer fools gladly. Things could get testy, words said. And a lot of it could leak into the press in the next few weeks and startle a lot of people.

But why wait? Go on the Sunday morning talk shows and tell Bob, David, Chris and George. Write a big op-ed piece called “What I Told the CEOs.”

Everyone with a brain in GOP politics would tell you this is a real chump move. You’d be alienating the very funders you’d need to become a viable contender.

But you know what? Nothing comes free. In the end they’re millstones around your neck. They think if they’ve invested in you they control pieces of your policy. That’s certainly how they do it with the Democrats. And their policy ideas are usually bad! At least their central one, Keep Me Rich, is. Go help everyone be rich.

The truth is you’d lose nothing. Because they’re going to go for Hillary anyway. They know her, like her, have had transactions with her and Bill over the years. Also their wives will kill them if they don’t.

You think you’d lose everything to be brave and back policy you know is right. In the long run you’d lose nothing and could have much to gain. Look to your funding from what used to be called Main Street and doesn’t have a name anymore.

Posted by Michael Kaplan at 4:51 PM

“Arrow”: Manu Bennett Talks Playing Deathstroke And What's Ahead For Crixus On “Spartacus.”

“Arrow”: Manu Bennett Talks Playing Deathstroke And What's Ahead For Crixus On “Spartacus.” By Laura Prudom. The Huffington Post, February 13, 2013.

We’re supposed to be rooting for the slaves, but they really do some questionable things in the name of this war – I love that Steven DeKnight doesn’t want to paint them as completely noble or righteous when history says that they were kind of as bad as the Romans in a lot of ways. . .

Yeah, exactly. I think what they are doing by introducing Caesar is that they are introducing the might and the power and they’re introducing the greatness of Rome. I think the might and the power of Rome was always an element that existed in our story somewhere, it just wasn’t exposed that much. I mean, why did Batiatus want to get to the top of Rome? Because Rome is a hugely productive society; because it had wealth. Batiatus was just a little man that was disgruntled in his own small town of Capua and was trying to use entertainment with the people to gain power but he betrayed everybody. Even the characters that he betrayed had kids and families.

So I think where the story is going now is that it’s getting us out of the darkness of that fighting ludus. The slave rebellion has gone up against the military and is being chased, but of course the military powers are always trying to destroy something that’s trying to destroy itself internally. Now, [the slaves] are only just getting a glimpse of another city of what Roman people are like. This justification of the Romans is hugely necessary in the story, because we are going into a great time, a golden period of Roman history -- a time of Caesar ... You’re showing that there are really two sides to the coin and that Rome is a formidable, powerful, but also a very advanced society. Unfortunately, as a sign of the times, these slaves are just trying to escape their own hell but they might find themselves in amidst heaven, and there are some angels in their heaven of Rome somewhere too. 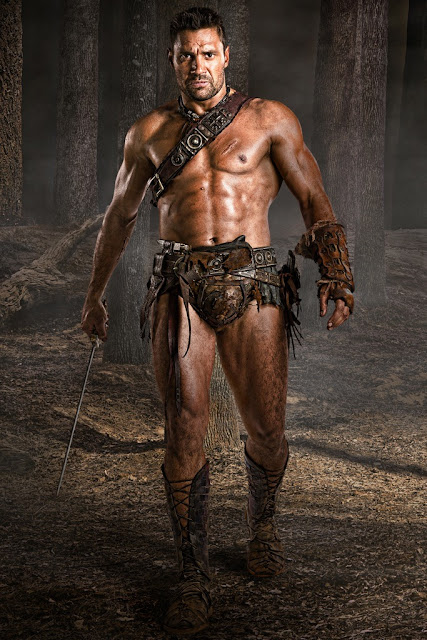 Manu Bennett as Crixus in Spartacus.
Posted by Michael Kaplan at 1:33 AM