The Crisis Is Islam. By David Harsanyi.

The Crisis Is Islam. By David Harsanyi. The Federalist, November 16, 2015.

Why is it that so many of the same people who are skeptical about exporting liberalism (count me as one) are perfectly content with the idea of importing illiberalism?

Even as the terrorist attacks in Paris were happening, a predictable debate broke out over the millions of Islamic refugees now pouring into the West from the Arab world. We were once again asked to pretend that Islamic terrorism materializes in a vacuum that has absolutely nothing to do with theological beliefs of the majority of people in the Middle East and thus nothing to do with brutality and oppression that prevail in the region.

One of the most common talking points regarding refugees has been this: 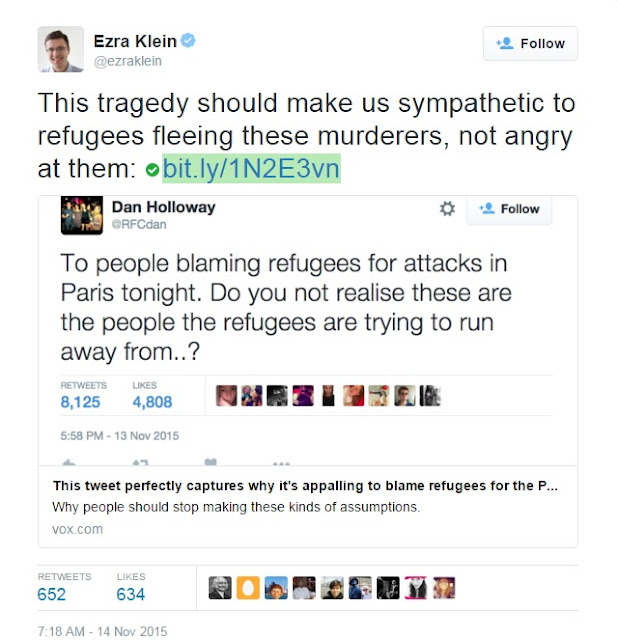 From the Vox piece:

Again, we still don’t know who’s to blame for the Paris attacks, whether a jihadist group was involved, or the motives involved. But if a jihadist group is the culprit, these kinds of terrorist organizations are exactly the kind of danger that many Syrian refugees are fleeing from. It is ISIS, after all, that has terrorized so much of Syria — and forced people to flee their homes to avoid violence.

This kind of emotional appeal avoids some very inconvenient facts. For starters, it looks like at least one of the attackers was a been (update: or posed) as a refugee from Syria. Put another way: he was a terrorist posing as a refugee — one of the most potent arguments refugee opponents offered.

Whatever the case, it’s true that most refugees are fleeing genuine and horrifying violence. But it is also true that many refugees bring with them — through their culture, ideology, and faith — the same conditions that bred the violence in the first place. It has nothing to do with what immigrants “look” like or how many superb and moral Muslims there are in the world (because there are many) and everything to do with what these refugees believe.

The vast majority of Muslims aren’t terrorists, but in the contemporary world nearly all movements and ideas that produce political terrorism are birthed in Islamic communities that house mostly peaceful people. Mass immigration bolsters those communities with hundreds of thousands of new, unassimilated adherents in the middle of secular nations with belief systems that grate against Islamic worldview. How can Europe not expect some of them will embrace the radicalism and fundamentalism adopted to some extent in nearly every other major Islamic community?

It doesn’t only manifest in terrorism, but in the medievalism of whippings, mass hangings, stoning, and violent misogyny and bigotry — not just mean words.

The tragedy of Syria should make us sympathetic to the plight of refugees fleeing murderers, but that doesn’t change the fact that — according to a Pew poll and every other reputable polling that’s been done on the topic — “overwhelming percentages of Muslims in many countries want Islamic law (sharia) to be the official law of the land.” The losers of civil war are victims, but that doesn’t mean they have liberal values. When the Arab world has been granted the right to vote, it almost always backs religious extremism. It votes for Hamas and for the Muslim Brotherhood. ISIS and Shia terror groups aren’t funded by Kickstarter; they are partly funded by forces in Gulf States, Iran, and throughout the Islamic world.

Here at home, the restraints of feigned tolerance make debating this issue seem like we’re living in kindergarten circle time. When John Dickerson asked the Democratic candidates if they would use the words “radical Islam” at the presidential debate on Saturday to describe the enemy, not one of them would do so. Like the two presidents before them, Democrats now function in a fantastical alternative reality where every denomination is equally decent (other than, perhaps, orthodox Christians here in U.S.) and all of humanity share the same values and the same dreams.

When there is a deadly bombing in Beirut or horrifying assaults on civilian populations in Iraq or Syria, it is part of an ongoing factional religious war. This is not some ideology disconnected from all others that visits from outer space every few days to kill humans randomly. Yet, many of the same people who argue that ISIS was created by George Bush and climate change will also tell you that the group has nothing to do with Islam. It’s about economics. It’s about blowback. It’s about poverty. It’s about anything and everything but the theological war that’s actually going on.

None of this is to say Muslims can never assimilate in the West. The U.S., for the most part, proves the opposite. But there is nothing bigoted about being vigilant when embracing millions of new people who bring all kinds of illiberal baggage with them. If, as Ayaan Hirsi Ali says, we keep pretending this has nothing to do with Islam, we will never actually talk about the problem. There are many good Muslims, but if that’s the only criteria, no one will be able to be critical of any theology or ideology ever again.

To Defeat ISIS, Put Boots on the Ground. By David French.

Since the Paris attacks there have been an avalanche of pledges to destroy ISIS, to wage “pitiless” or “merciless” war against the world’s worst and most bloodthirsty terrorist organization. Don’t listen. These pledges are just so much noise — so much hot air — unless the pledge is accompanied by a plan to put American boots on the ground, in close combat against ISIS, in sufficient numbers to not just defeat the jihadists but impose Surge-scale losses on ISIS personnel and infrastructure.

Politicians won’t say this, because they won’t lead. Instead, they’ll offer plans for increased air strikes — or perhaps increased use of the special forces (as if mere invocation of SEAL Team Six indicates political toughness) — and always they’ll go back to the Kurds. Again and again, we here the same formula: Kurds plus special forces plus more air strikes equals victory.

Wrong. It’s not enough, and it’s especially not enough against ISIS, a jihadist force that aspires to take and hold territory. Even if we turned Ramadi into rubble, so long as jihadists still live there, still control the remnants, and still shake their fists at the sky, then to millions of potential jihadists they are defying the West. They are winning. Bombing a city to rubble and then bombing the rubble won’t defeat ISIS. Breaking its hold on the actual land it controls will.

The key to ISIS’s powerful psychological hold on the imagination of radical Muslims is its military success — its power. It is living its theology, waging war for Allah — and winning. Its offensives last summer and fall may have since stalled, but their spectacular victories — some gained even after the United States joined the fight — still resonate.

From the ISIS point of view, they haven’t just withstood the West, they’ve expanded, with franchises in Egypt, North Africa (including Libya), and Nigeria. They’ve also increased their striking power, showing that they’re capable of striking grievous blows against two great powers — Russia and France — in one month. Indeed, one reason I’m particularly worried about a strike at home is that a strike here would serve as the climax of ISIS’s most recent terror campaign, proving to the world that no one is beyond its reach.

To counter ISIS’s dramatic and public victories, we must deal it more dramatic and more public defeats. It has to lose the seats of its power, starting in Iraq. Fred and Kimberly Kagan — strategists who helped conceive of the Surge, al-Qaeda’s first defeat in Iraq — have done yeoman’s work outlining a comprehensive, detailed military plan for defeating ISIS, a plan that includes deploying American brigade combat teams. In response to the Paris attacks, the Kagans outlined a number of necessary actions. I want to highlight the first three as particularly critical.

Second: “Put the necessary U.S. forces on the ground in Iraq to help the Iraqis retake Ramadi and Fallujah rapidly and prepare them to retake Mosul within six months.” This is the most important step. The Kagans seem to think we can accomplish this part of the mission with only 10,000 U.S. troops and no brigade combat teams. I’m skeptical that our Iraqi allies — even with American special forces, artillery, and aviation support — can do the job. While I’m happy to be wrong, we should deploy troops who can react with decisive force if and when the offensive stalls. Moreover, it’s highly likely we could do so with French (and perhaps British) support. A French brigade could make a decisive impact on the battlefield.

Third: “Don’t over-rely on Kurdish forces for rapid, decisive operations beyond Kurdish ethnic boundaries.” This can’t be emphasized enough. Too many American policymakers are looking to the Kurds as saviors, as the ground force that will relieve American soldiers of the need to once again lay their lives on the line in the Middle East. But striking significantly beyond Kurdish regions is bad for our strategy, and it’s bad for the Kurds. There would be few better ways to further inflame ethnic tensions (and increase ISIS’s recruitment) than to send brigades of Kurds into Sunni strongholds.

The combination of a devastating bombing campaign in Iraq and Syria and a decisive ground offensive in Iraq would inflict a crippling and humiliating defeat on ISIS. In all likelihood, it would also fatally  undermine ISIS’s position in Syria. It is entirely possible that competing Syrian militias would quickly crush a severely weakened ISIS. Thus, victory in Iraq could be followed by a brief pause in ground operations to assess the risks and benefits of large-scale intervention in Syria.

But what to do about Russia and the Assad regime? It’s difficult to imagine an end to the Syrian civil war while the Assad regime remains, but one can imagine an end to ISIS without an end to Assad. The Kagans recommend aggressive action (though not direct military intervention) to topple the Assad regime and remove Russia from Syria, but the U.S. should be extremely wary of attempting to impose a political or military solution to the Syrian civil war. Russia is stepping into a quagmire. America should exercise extreme caution before doing the same.

Flexibility is key. It’s often said that no plan survives its first contact with the enemy, and that would no doubt be the case in a serious fight with ISIS. The mission is to utterly destroy ISIS. The method — including numbers of troops deployed and targets engaged — is variable.

But we cannot even begin to wage war effectively when our people are unwilling and our leaders are weak. Now is not the time for political caution, for telling people what they want to hear. Now is the time for leadership, for bold truth-telling. Sadly, while our warriors are willing, our leaders are weak, and the best strategies are meaningless when politicians are unwilling to commit. We’ve learned the wrong lessons from Iraq. The United States didn’t abandon a failing, unwinnable fight. We snatched defeat from the jaws of victory. We must never do so again.