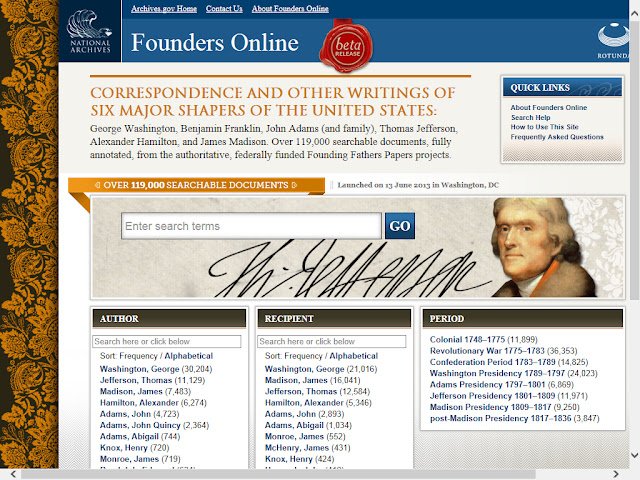 This is a historian’s dream come true. The complete modern editions of the papers of the six major Founding Fathers are now available online. With this online edition, the product of the advances of modern scholarship and information technology, the words and deeds of the men who led the Revolution and created the nation are open for all to explore. Americans no longer have any excuse to remain ignorant of their history and their heritage of liberty. Students of all ages, from elementary school to Ph.D. can now discover how our nation was born. This is what the Internet was created for. My only criticism is that the papers of Andrew Jackson, who ranks with the original Founders in importance for America’s national development, were not included. I hope this will be rectified in the future.

Here’s an example of the treasures to be found. This quote is from a letter by George Washington to John Banister, a Virginia delegate to the Continental Congress, written at Valley Forge. After three years as commander in chief of the Continental Army, Washington had become a sharp and unsentimental realist about human nature, the American people, and their politicians. Speaking from bitter experience he explained why patriotism was not enough to sustain men through a long and bloody war.

Men may speculate as they will—they may talk of patriotism—they may draw a few examples from ancient story of great atchievements performed by it’s influence; but, whoever builds upon it, as a sufficient basis, for conducting a long and bloody War, will find themselves deceived in the end. We must take the passions of Men, as nature has given them, and those principles as a guide, which are generally the rule of action. I do not mean to exclude altogether the idea of patriotism. I know it exists, and I know it has done much in the present contest. But I will venture to assert, that a great and lasting War can never be supported on this principle alone—It must be aided by a prospect of interest or some reward. For a time it may, of itself, push men to action—to bear much—to encounter difficulties; but it will not endure unassisted by interest.

You can find the complete letter at Founders Online here. You can find an image of the manuscript letter at the Library of Congress here.

And here John Adams confides to wife Abigail his dawning awareness of the pivotal role he is about to play in history. After listening to a sermon by the Reverend George Duffield, a New Light Presbyterian and chaplain of the Continental Congress, Adams placed the American struggle for liberty (and himself) in a Biblical context.

Jealousy that the Israelites would throw off the Government of Egypt made him issue his Edict that the Midwives should cast the Children into the River, and the other Edict that the Men should make a large Revenue of Brick without Straw. He concluded that the Course of Events, indicated strongly the Design of Providence that We should be seperated from G. Britain, &c.

Is it not a Saying of Moses, who am I, that I should go in and out before this great People? When I consider the great Events which are passed, and those greater which are rapidly advancing, and that I may have been instrumental of touching some Springs, and turning some small Wheels, which have had and will have such Effects, I feel an Awe upon my Mind, which is not easily described.

This is but one of many examples of how Americans of the Revolutionary era saw themselves as the new Israel. For the complete letter at Founders Online, click here. For an image of the manuscript letter at the Massachusetts Historical Society, click here.

The Founding Fathers: Coming to a Web Site Near You. By David S. Ferriero. OAH Outlook, August 2013.

The Papers of the Founding Fathers Are Now Online. By Keith Donohue. The White House Blog, June 13, 2013. Also here.

How to Understand Islamism: Read What Its Leaders Actually Say. By Barry Rubin.

How to Understand Islamism: Read What Its Leaders Actually Say. By Barry Rubin. PJ Media, June 13, 2013.
Posted by Michael Kaplan at 12:39 PM

His views are extreme. His political skills are fierce. And that’s what makes him so dangerous.

About that Rand Paul Cover Photo . . . A Conversation with Platon. By Hillary Kelly. The New Republic, June 17, 2013.