A Seal Bearing the Name of King Hezekiah of Judah Found in Jerusalem. By Ilan Ben Zion.

Settlement and Demography in Seventh-Century Judah and the Extent and Intensity of Sennacherib’s Campaign. By Avraham Faust. Palestine Exploration Quarterly, Vol. 140, No. 3 (November 2008). 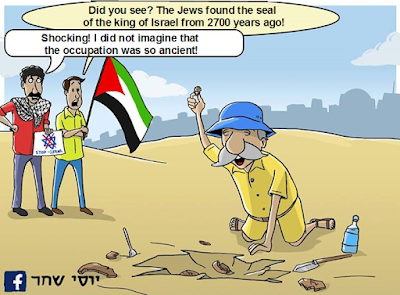 Impression with “Hezekiah [son of] Ahaz, king of Judah,” unearthed next to Temple Mount, is decorated with Egyptian motifs.

Archaeologists deciphered a seal impression bearing the name of the 8th century BCE biblical King Hezekiah recently found during excavations next to the Old City of Jerusalem, the Hebrew University announced Wednesday.

The bulla, a stamp seal impression, was one of dozens found in recent years in a royal building in the Ophel, excavation leader Dr. Eilat Mazar said at a press conference held at the Mount Scopus campus, and bears the name “Hezekiah [son of] Ahaz, king of Judah,” an 8th century Judean ruler.

Mazar called the artifact “the closest as ever that we can get to something that was most likely held by King Hezekiah himself.” She said that the bulla “strengthens what we know already from the Bible about [Hezekiah].”

The bulla in question used to seal a papyrus scroll and an impression of the fibers was preserved on the inverse, Mazar said, suggesting the seal once enclosed a document signed by the king himself.

Hezekiah ruled the kingdom of Judah from around 715 and 686 BCE. During his reign the kingdom was invaded by the ascendant Assyrian Empire and the capital, Jerusalem, was besieged by the army of King Sennacherib. The Book of Kings II 18:5 says of Hezekiah that “after him was none like him among all the kings of Judah, nor among them that were before him.” He’s also mentioned in the annals of Sennacherib.


According to the biblical narrative, Hezekiah ordered the excavation of a water channel to bring water from the Siloam Spring into the city and foil the siege. That tunnel was discovered in the 19th century and an inscription found inside it gives an account of its construction.

The minuscule, centimeter-long artifact is decorated with Egyptian-style motifs — a winged sun disk and an ankh, symbol of life. Iconography of this sort had already been appropriated by Judean leaders and appear on other contemporary seals across the ancient Near East.

“The Egyptian motifs were spread over the second millennium BCE all over the region” and no longer bore their original significance, Mazar explained. Ancient Judeans employed the sun disk to denote the Almighty, and its bowed wings may connote Hezekiah’s expression that “my power is thanks to God’s protection,” she said.

“It was nothing like what it meant to the Egyptians,” she said.

The bulla was found during excavations in 2009 but its significance was initially overlooked by researchers. Only this year did Hebrew University archaeologist Reut Ben Arieh decipher the inscription on the seal impression and determine its significance.

An initial study of the seal read the bottom register as the name “Melkiyahu,” but once she noticed tiny punctuation marks in the middle, separating the letters into the words “king” and “Judah,” Ben Arieh told The Times of Israel, “immediately we understood” that it read “king of Judea.”

Other seals bearing the name of King Hezekiah are on the antiquities market, but “none is from an archaeological excavation, and that makes all the difference,” Mazar said. The discovery of this new seal in the archaeological context supports the other artifacts’ authenticity, however.

The Ophel is part of the ancient city of Jerusalem situated immediately south of the flashpoint Temple Mount, the site of two Jewish temples in antiquity. It is the holiest site to Jews and the third holiest site to Muslims.

The excavations were a collaborative effort by the Israel Antiquities Authority and Hebrew University.

Excavations at the site are contentious for taking place in East Jerusalem. Nonetheless, they have unearthed some of the earliest known artifacts in the city, dating as far back as the 12th and 11th centuries BCE. According to Mazar, these include evidence supporting the historicity of the biblical kings David and Solomon, founders of the Judean dynasty.

Two years ago, Mazar announced the discovery of a massive gold medallion and a trove of gold pieces found at the base of the Temple Mount dating to the early 7th century CE. The trove included 36 gold Byzantine coins, gold bracelets, earrings, a silver ingot, a gold-plated hexagonal prism and the large golden medallion embossed with Jewish motifs. It’s currently on display at the Israel Museum in Jerusalem.

Mazar, a third-generation Israeli archaeologist, has overseen the excavations of the Ophel and Jerusalem’s City of David, the lower slope of the Temple Mount.