Beating the Islamist death cult. By David Horovitz. The Times of Israel, November 23, 2015.

The fight needs to be physically taken to the enemy. But it also needs to be waged educationally — in the schools and the mosques and online.

Israel on Monday is enduring yet another day of incessant terror attacks. The death of an 18-year-old Israeli, stabbed in the stomach as he stood with friends at a gas station on Road 443 between Jerusalem and Tel Aviv, has just been confirmed. A few hours ago, two teenage Palestinian girls pulled out scissors in an attempt to kill Israelis in Jerusalem’s main Mahane Yehuda fruit and vegetable market, and wound up injuring a 70-year-old Palestinian man from Bethlehem.

And those were only the two worst attacks so far today — on a day that also saw the funeral of yesterday’s terror fatality, Hadar Buchris, 21, a young Israeli woman who was murdered at the Gush Etzion junction south of Jerusalem just hours before yet another terror fatality from the self-same spot, American yeshiva student Ezra Schwartz, 18, was laid to rest in Boston.

The national mood is grim. The fear of attack is relentless.

Critics say the government, the army, should be doing a better job of preventing the attacks. There’s some basis to the complaint that the Gush Etzion junction should be more effectively protected; it’s been the site of numerous attacks, and the IDF is again now looking at ways to safeguard those who use it.

But the fact is that Jews and Arabs, Israelis and Palestinians live in intimate proximity in our part of the world. And when much of the Palestinians’ political leadership, spiritual leadership, educational system, mainstream media and social media relentlessly preach the hatred of Jews, the fundamental illegitimacy of the Jewish state, and the ostensible religious requirement to kill and be killed, the murderous consequences are difficult to defend against hermetically.

This latest terror surge is unlikely to pass quickly. A whole new generation has been filled with loathing for Jews, for Israel. Not all young Palestinians are going out stabbing; not all of them have been recruited to the killing fields. But the purported religious imperative is pushing more and more of them to act — several times a day, of late.

While foolish outsiders bend over backwards to supply legitimacy for the terrorism, bemoaning the suffering of Palestinians under Israeli control, it should not need stressing that this new systematic incitement of violence — just like the evil Second Intifada suicide bombing onslaught of more than a decade ago — is both utterly unjustifiable and entirely counterproductive. It can only render the prospect of Palestinian statehood more remote. As we mourn our daily dead, Israelis are well aware that the toll would be far higher were the suicide bomb factories of Jenin, Nablus and other West Bank cities still manufacturing explosive belts and indoctrinating their wearers. The new stabbing surge is an immense deterrent to any notion of again relinquishing security control of the West Bank, as Israel had done in the years before the Second Intifada erupted in 2000.

As we watch all those Palestinian kids’ TV shows urging Jew-killing, read the Fatah and Hamas calls to murder, see the mothers and fathers of the daily murderers hailing their “martyred” children, the last thing we’re saying is, Let’s entrust these people with full sovereignty, so that they can more easily fulfill their stated ambition of pushing us into the sea. As we guard against them, all our differences — the arguments over settlements, over how to maintain a Jewish-democratic Israel, over what more we can do to create an environment more likely to encourage moderation — are simply overwhelmed and rendered irrelevant.

For now, Israelis are having to adjust their daily lives, to minimize their vulnerability, to guard against the banal norm of relaxing when out and about. More security forces are being deployed. The intelligence hierarchies are working overtime.

None of which constitutes a means of defanging Islamist terrorism at its source. For that — precisely as with the mass terror onslaught in Paris 10 days ago, and the dire ongoing threat of further Islamist terror coming West — what’s needed is concerted action at the grassroots.

When people come at you with a gun or a knife or scissors or bombs or their car, you had better stop them first. Ideally, you’ll identify and thwart them before they set out. The fight needs to be physically taken to the enemy. But it also needs to be waged educationally — in the schools and the mosques and online. The advocates and apologists must be afforded no tolerance.

We’ll not beat the many-headed Islamist terror monster until that ostensible religious imperative is shattered — until radical Islam, that is, is exposed, marginalized and ultimately defeated as the murderous death cult it is. 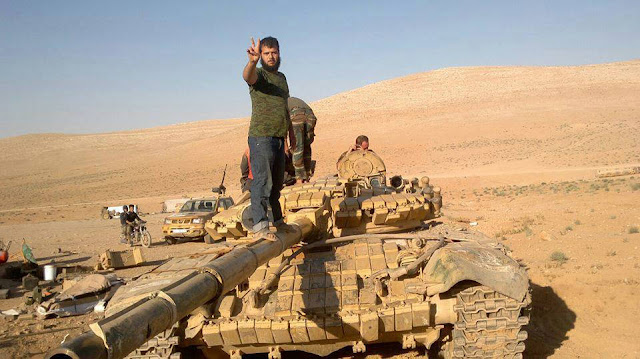 What if the battle isn't between good and evil, but rather between bloody and bloodier?

Americans have always loved the classic battles between good and evil: minutemen vs. Redcoats, the Greatest Generation vs. Hitler, Darth Vader vs. Luke Skywalker, Redskins vs. Cowboys (I won’t say who’s good and who’s evil). We like the clean lines that allow us to love and support the good guy while hating and opposing the bad guy. No complications, no difficult moral decisions to make. Such is the case in Syria today: we support the “moderate” rebels—the good guys; we oppose ISIS and Assad—the bad guys. What would happen, however, if we discovered the battle wasn’t between good and evil, but rather between one group with bloody hands and another with really bloody hands?

Since Syria’s civil war began major media outlets have routinely reported on the barbaric atrocities committed by Assad’s forces against the civil population. Only rarely, however, do these same outlets report on the war crimes frequently committed by the opposition groups we support. But these crimes are neither minor nor isolated. A few examples:

- Human Rights Watch reported that in August 2013 rebel forces killed sixty-seven civilians during a key battle. These deaths were no collateral damage, however, as the report stated “evidence strongly suggests that the killings, hostage taking, and other abuses committed by opposition forces on and after August 4 rise to the level of crimes against humanity”

- Amnesty International claimed that in 2014 rebels killed over 600 civilians. “Some of these attacks,” the report asserted, “may have also constituted deliberate attacks on civilians or civilian objects, which are also war crimes.”

If, even into the next administration, the U.S. continues to support the opposition groups and they should happen to cumulatively overthrow Assad, what happens next? Will these groups work together to form an effective interim government, leading to fair and free elections and an end to the violence? The likelier scenario is that once Assad is out of power, the strongest of these groups will turn on each other in a new fight for control of the new government. We’ve seen just this dynamic play out in recent years.

In 2011, the U.S. supported rebel groups in Libya against Qaddafi by conducting hundreds of cruise missile and airstrikes. After the Libyan leader was killed by rebels, President Barack Obama optimistically said to the Libyan people: “You have won your revolution. And now, we will be a partner as you forge a future that provides dignity, freedom and opportunity.” Mere months later, however, the once-unified opposition fragmented and turned on itself. Now four years after we succeeded in removing a tyrant from power, Libya remains one of the most unstable, violent and ungoverned areas in the world.

In light of the fact that all participants of the war in Syria have committed war crimes, American policymakers have to face some hard questions with no good answers: if there aren’t any good guys, who do we support—or do we support anyone? If we don’t take one side over the other, what happens to the violence in that nation and the millions of innocent civilians who will continue to live in fear? Can America, the land of the free and home of the brave, stand idly by while militias wage war in which tens of thousands die?

It may be that none of the warring sides represent or would support our values and thus, regardless of which side ultimately prevails, American interests will not be served. The best we could hope for might be to use U.S. diplomatic and humanitarian resources to encourage the combatants to resolve their differences, while trying to contain the violence and leading humanitarian efforts to lessen the suffering of the innocents.

Such a policy would likely be attacked as “defeatist” or as a failure to lead. But the hard facts are that despite our attempts to resolve civil wars in other countries in recent years, the result has been a worsening of the violence, an increase in the suffering of those we’ve sought to help, and ultimately the establishment of regimes that neither represent American values nor provide peace and democracy to their people.

As we near Presidential primary season, we can only hope that the ultimate winner—whether Republican or Democrat or Independent, male or female—will show the wisdom, moral courage and leadership necessary to preserve American values and interests.