First Crush Trump. But Then What? By Jennifer Rubin.

First crush Trump. But then what? By Jennifer Rubin. Washington Post, August 8, 2016.

Prominent #NeverTrump advocate and GOP consultant Rick Wilson (reportedly assisting in the independent Republican bid of former CIA veteran Evan McMullin) persuasively argues that it is in the party’s and country’s interest for Donald Trump to lose — by a lot. He explains:

[I]f there’s a loss by a slim margin in the popular vote or electoral college, millions of already embittered Americans, worked into a frenzy by a shameless leader who will surely refuse to accept the returns, will start the next four years convinced that the United States of America is little more than a banana republic — and the presidency of Hillary Clinton is irretrievably illegitimate.

That will be awful for the country.

The second reason Trump needs to fall hard in November is that the Party of Lincoln needs a complete, top-to-bottom reset — one that completely purges the Trumpkins who believe racial animus is a governing philosophy and that their ignorant and angry primal screams can ever build a Republican majority.

In other words, Trump, Trumpism and the unhealthy network of right-wing apologists (the American Conservative Union, talk radio, Fox Non-News primetime hosts, the senior staff of the Republican National Committee) all need to go down to crushing defeat so that the center-right can begin anew. (“No more hate and reckless group blame. No more fact-free fearmongering,” Wilson urges. “No more feeding the obese ego of a man who’s transparently unfit for the job.”)

If there is to be a viable alternative to liberal statism, a center right party must prioritize character, tolerance, intellectual honesty and decency — not a check list of policy positions from the 1980s — as the minimum requirements for elected office and party leadership. Most large organizations have a “mission” statement and the post-Trump center-right party surely needs one that emphasizes those attributes. A national center-right party should not be tethered to a check list of granular positions on dozens of issues, but instead to general propositions (e.g. American leadership in the world is essential; all Americans are deserving of the right to pursue earned success) and to a type of political honor code that insists upon civility, respect for fellow Americans and cultivation of an informed electorate. If this sounds ethereal and old-fashioned it is only because the GOP and Republican leaders have demonstrated incivility, lack of respect for their fellow Americans and perpetration of political myths and flat-out untruths. The party at the highest levels must eschew the politics of resentment, anger and hate.

Defining how the center-right party must behave needs to precede the decision as to whether the GOP can be that vehicle or whether a new party is preferable. Frankly if the Trumpist elements cannot be purged and will not tolerate an extensive reworking of the party, it will be time for men and women of good conscience to leave the wreckage of the GOP. The resulting political entity, whether the revised GOP or something altogether new, will need to be a 21st-century party that does not cultivate kooks, conspiratorialists and bigots.

A party that treats Sean Hannity as a journalist, the National Enquirer and talk radio as authoritative, and the email harangues and score cards of Beltway hucksters as more authentic than the views and needs of actual voters cannot survive. It does not deserve to survive. The election exposed a raft of right-wing media types undeserving of the center-right’s attention or indulgence. Voters can tune off or click past the schlock news, but the party itself should cease treating propagandists as legitimate journalists. Conservatives should decline to go on their shows, refuse to invite them to moderate panels or officiate at party functions; or speak respectfully of outfits that have flacked for Trump, contrary to the interests of conservatives and the country.

Trump belonged in a fringe right-wing, nativist party akin to the far-right European parties. If there is a segment of Americans who prefer that sort of thing, so be it. But that party cannot be the GOP or its successor. So, yes, after the election it will be time to clean house and clean out the intellectual cobwebs. Honor politicians who resisted Trump and look for future leaders among their ranks.

The election already has discredited the evangelical charlatans who claim political virtue and moral authority. Meanwhile, Libertarians (on limited government, trade, immigration and individual rights) in many respects have preserved the essence of the modern conservative movement (or 19th-century small “l” liberalism). It is time to reconnect with the latter (despite some significant differences of opinion) and to end toadying to the former.

Finally, it is time to eschew anti-immigrant fervor, opposition to gay marriage (which is as much a part of the legal landscape as is desegregation) and anti-government nihilism. These are not consistent with 21st-century America nor the attributes of a successful national party. The country will never return to its pre-New Deal size, nor will the American people tolerate evisceration of the safety net. Federal regulations of some sort will exist. The question is what kinds of government, regulations, tax and budget measures are implemented — ones that enlarge the federal government and centralize power or which, where possible, employ market forces and cultivate strong communities.

All of this requires, per Wilson, Trump’s sound thrashing. Then reform, revitalization and refurbishment of the GOP — if not abandonment — can proceed. 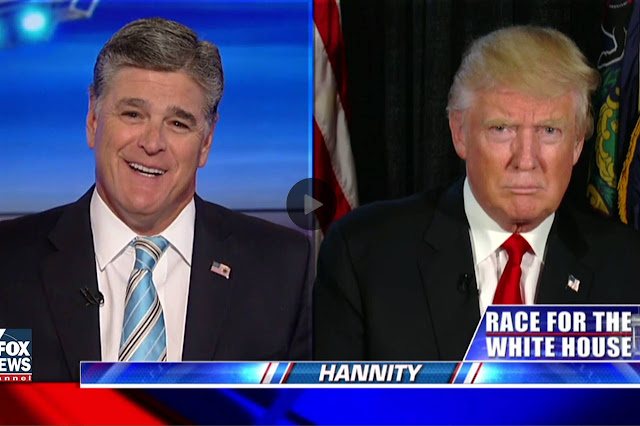 The right’s political huckster gives Al Sharpton a run for his money.

It was probably inevitable that Donald Trump and his media munchkins would alight on the stab-in-the-back theory to explain his probable defeat in November. The surprise is that they are doing so with the election still three months out.

“If in 96 days Trump loses this election, I am pointing the finger directly at people like Paul Ryan and Mitch McConnell and Lindsey Graham and John McCain and John Kasich and Ted Cruz,” Fox News host Sean Hannity told his radio audience last week. “I have watched these Republicans be more harsh toward Donald Trump than they’ve ever been in standing up to Barack Obama and his radical agenda.”

Mr. Hannity has never made a secret of his feelings for Mr. Trump, which is the love that dares to speak its name. But his comments were also a revelation, and not just that it has dawned on him that the Republican nominee is likely to lose and lose big. Like members of a cult who discover too late that their self-proclaimed messiah is mortal after all, rationalizations are required.

Mr. Trump has lately been road-testing one such rationalization, saying the election will be “rigged.” Voter fraud is a reality in American elections, but it is typical of the candidate to confuse anecdote with data and turn allegation into conspiracy. Mr. Trump also says the media is “rigged” against him, which is amusing coming from the beneficiary of the equivalent of $3 billion in free advertising.

Mr. Hannity’s excuses are even more disgraceful, combining oily self-absolution with venomous obloquy for the very conservatives who have spent the year warning that a Trump candidacy is an epic GOP disaster that all-but guarantees Hillary Clinton’s election. The habit of shifting blame and refusing to take responsibility is supposed to be the curse of the underclass and its political hucksters, but Mr. Hannity is giving Al Sharpton a run for his money.

Mr. Hannity’s other goal is to preserve the fiction—first cultivated by Ted Cruz and later adopted by the Trumpians—that a wan GOP “establishment” and its “Acela corridor” voters sat on their hands while Mr. Obama traduced the Constitution and sold us out to the enemy. “They did nothing, nothing!” the anchor fumed Thursday on his show. “All these phony votes to repeal and replace ObamaCare, show votes so they go back and keep their power and get re-elected.”

Maybe Mr. Hannity thinks that Messrs. Ryan and McConnell should have jumped the White House fence and stuck a pitchfork in the president. Or that they should have amended the Constitution to repeal Article One, Section Seven—the one that gives the president his veto. Otherwise, it’s hard to understand the constant lament about a do-nothing Congress except by wondering whether Mr. Hannity is stupid or dishonest. 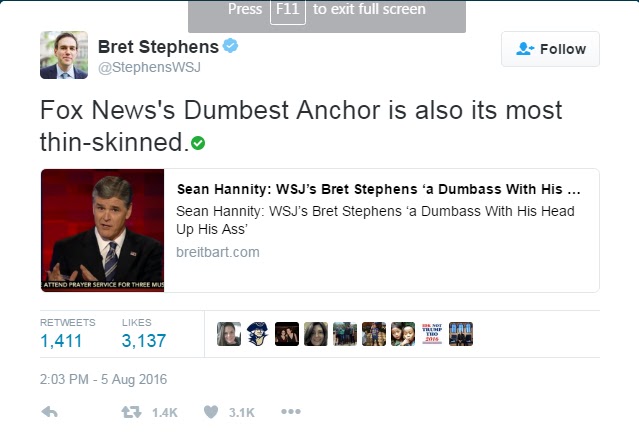 On Thursday evening I opted to give him the benefit of the doubt by writing on Twitter that he was Fox’s “dumbest anchor.” He immediately proved my point by re-tweeting me to his 1.5 million Twitter followers—an audience I could never have reached on my own. Later, on the radio, he called me a “dumba— with his head up his a—,” demonstrating he can’t even swear competently.

But Mr. Hannity’s tantrum obscures the uglier side of what he is trying to do, which is to paint targets on the GOP’s genuine Reaganites—pro-trade, pro-immigration, pro-NATO, pro-entitlement reform—and replace them with the Party of Trump—anti-all of the above—no matter what happens to the candidate come November.

Who might help lead this Unglorious Revolution of the crass, clueless and shoulder-chipped? Those who can make themselves rich by shouting and hearing echoes of themselves even as the GOP loses one presidential election after another.

This is the reason I’ve consistently argued that the only hope for a conservative restoration is a blowout Hillary Clinton victory, held in check by a Republican majority in Congress. If Mr. Trump loses the election narrowly, the stab-in-the-back thesis will have a patina of credibility that he might have won had it not been for the opposition of people like me. But a McGovern-style defeat makes that argument impossible to sustain except among the most cretinous. We can count on Mr. Hannity for that.

***
Last week, I appeared on Fareed Zakaria’s CNN show opposite a Trump supporter named Emily Miller. At the end of the show, I said Americans deserve a president who can speak grammatical English. Ms. Miller retorted that it was “snobby” of me to say so.

There was a time when the conservative movement was led by the likes of Bill Buckley and Irving Kristol and Bob Bartley, men of ideas who invested the Republican Party with intellectual seriousness. Today’s GOP is on the road to self-immolation, thanks in part to the veneration of ignorance typified by Ms. Miller and Mr. Hannity. As conservatives go through their pre- and post-mortems, they should think about the damage that such veneration can do.