The War on Terrorism Won’t Be Won on the Battlefield. By Fareed Zakaria.

The war on terrorism won’t be won on the battlefield. By Fareed Zakaria. Washington Post, September 8, 2016.

On the morning of Sept. 11, 2001, I was driving on the Long Island Expressway, heading out to a friend’s house to spend a few weeks working on a book. An hour into my drive, I switched from music to news and listened with horror to reports that two large passenger planes had crashed into the World Trade Center. I turned around instantly, realizing that my sabbatical was over. So was America’s.

It’s difficult now to recall the mood of the 1990s. The Cold War had ended, overwhelmingly on American terms. A world that had been divided into two camps, politically and economically, was now one. Dozens of countries from Latin America to Africa to Asia that were once staunchly socialist were moving toward capitalism and democracy, embracing a global order they once decried as unjust and imperial.

America in the 1990s was consumed by talk of economics and technology. The information revolution was just taking off. I try to explain to my children that only two decades ago, much of the world that seems indispensable today — the Internet, cellphones — did not exist for most people. In the early 1990s, AOL and Netscape gave everyday Americans the chance to browse the Internet. Until then, the revolutionary technology that had broken down government censorship and opened access to information in the communist bloc was — the fax machine. Explaining its effects, the strategist Albert Wohlstetter had written an essay for the Wall Street Journal titled “The Fax Will Make You Free.”

What few of us recognized at the time was that one part of the world was not being reshaped by these winds of change — the Middle East. As communism crumbled, Latin American juntas yielded, apartheid cracked and Asian strongmen gave way to elected leaders, the Middle East remained stagnant. Almost every regime in the region, from Libya to Egypt to Syria, was run by the same authoritarian system that had been in place for decades. The rulers were mostly secular, autocratic and deeply repressive. They had maintained political control but produced economic despair and social paralysis. For a young man in the Middle East — and there was a surfeit of young men — the world was moving forward everywhere except at home.

Into this void entered political Islam. There had always been preachers and thinkers who believed that Islam was not just a religion but a complete system of politics, economics and law. As the Arab world’s secular dictatorships produced misery, more and more people listened to ideologues who had a simple slogan — Islam is the answer — by which they meant a radical, literalist Islam. The seductiveness of that slogan is really at the heart of the problem we still face today. It is what drives some young, alienated Muslim men (and even a few women) not just to kill but — far more difficult to understand — to die.

Where do things stand now? Since that day in September 2001, the United States has waged two major wars, embarked on dozens of smaller military missions, built a vast bureaucracy of homeland security and established rules and processes all meant to protect the United States and its allies from the dangers of Islamist terrorism.

Some of these actions have protected the United States and its allies. But the striking change that has taken place across the Middle East is that stability has been replaced by instability. The United States’ intervention in Iraq might have been the spark, but the kindling had been piling up high. The Arab Spring, for example, was the result of powerful demographic, economic and social pressures pushing up against regimes that had lost the ability to respond or adapt. Growing sectarianism — Shiite vs. Sunni, Arab vs. Kurd — had reshaped the politics of countries such as Iraq and Syria. When the repressive ruler was toppled — Hussein, Saleh, Gaddafi — the entire political order unraveled and the nation (a recent creation in the Arab world) itself fell apart.

The challenge in defeating the Islamic State is not really about vanquishing it on the battlefield. The United States has won battles like that for 15 years in Afghanistan and Iraq only to discover that once U.S. forces leave, the Taliban or the Islamic State or some other radical group returns. The way to have these groups stay defeated is to help Muslim countries find some form of politics that addresses the basic aspirations of their people — all their people. The goal is simple to express: to stop waves of disaffected young men from falling into despair at their conditions, surfing the Web and finding within it the same old slogan — Islam is the answer. When those young men stop clicking on that link, that is when the war on terrorism will be won.

Posted by Michael Kaplan at 5:16 PM

The Palestinians Were Osama bin Laden’s Most Ardent Fans. By Petra Marquardt-Bigman.

The Palestinians were Osama bin Laden’s most ardent fans. By Petra Marquardt-Bigman. The Times of Israel, September 11, 2016.

It is a fitting coincidence that just in time for this 15th anniversary of the 9/11 terror attacks, The New York Review of Books (NYRB) has published an article by Middle East analyst Nathan Thrall urging President Obama to use his remaining time in office to pass a United Nations Security Council resolution that would define binding parameters for the establishment of a Palestinian state in the West Bank and Gaza. Like most Middle East analysts, Thrall is apparently not interested in the longstanding and well-documented Palestinian support for terrorism, even though the pervasiveness of this support has arguably serious implications for the establishment of a Palestinian state.

Thrall wants President Obama “to salvage his legacy on the Israeli-Palestinian conflict,” asserting right at the outset that “Barack Obama entered the White House more deeply informed about and sympathetic to the Palestinian cause than any incoming president before him.” He notes Obama’s friendship with the historian Rashid Khalidi and his acquaintance with Edward Said – whom he describes as “the most famous and eloquent Palestinian critic of the Oslo accords;” Thrall then goes on to recall that Obama “had offered words of encouragement to Ali Abunimah, the Palestinian activist, writer, co-founder of the Electronic Intifada, and leading advocate of a one-state solution.” What Thrall prefers not to mention is the fact that Abunimah is also an ardent Hamas supporter and has only disdain for Obama. As Abunimah cockily declared in a tweet some three years ago, referencing all of Obama’s Palestinian “friends” mentioned by Thrall: “Back when this photo of me, Obama, Rashid Khalidi and Edward Said was taken, even I didn’t expect him [i.e. Obama] to be THIS bad.” 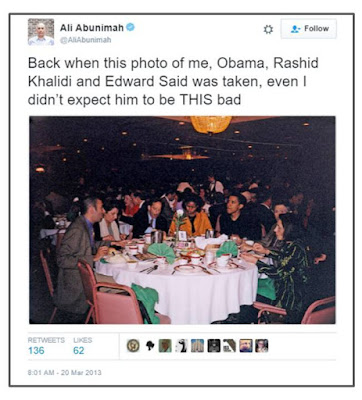 When Al-Qaeda terrorists attacked the US 15 years ago, Israelis had already been living for a year with the constant threat of Palestinian terror attacks, which had intensified since September 2000 in the wake of Israel’s offer of a Palestinian state at the Camp David negotiations in July 2000. Over the course of the following decade, it turned out that Palestinians were not only enthusiastic supporters of terrorism against Israelis, but also against Americans – even though the US has not only repeatedly tried to push for negotiations that would result in a Palestinian state, but has also provided millions of dollars in bilateral annual aid to the Palestinians and is the largest single-state donor to UNRWA, i.e. the UN agency that works exclusively for the roughly 5 million Palestinians who claim inherited refugee status.

Yet, as documented in surveys by the respected Pew Research Center, Palestinians have always been the most ardent admirers of Al-Qaeda leader Osama bin Laden. In 2003, a stunning 72 percent of Palestinians were willing to go on record expressing “a lot” or “some confidence” that bin Laden would “do the right thing regarding world affairs.” 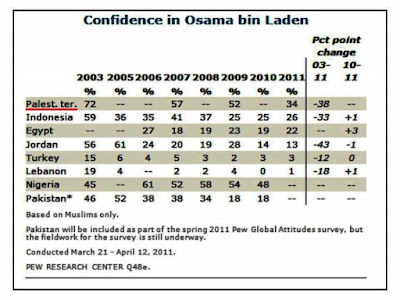 Palestinian “confidence” in bin Laden eroded only slowly: by 2009, 52 percent of Palestinians still trusted the Al-Qaeda leader to “do the right thing regarding world affairs;” and by 2011, when he was killed by US Special Forces in his hide-out in Pakistan, fully a third of Palestinians continued to hold bin Laden in high regard. Indeed, Hamas leader Ismail Haniyeh condemned bin Laden’s assassination and deplored “the killing of an Arab holy warrior.” Even in 2014, 25 percent of Palestinians still expressed a “favorable” opinion of Al-Qaeda. This means statistically that just two years ago, one out of every four Palestinians in the West Bank and Gaza had a “favorable” opinion of Al-Qaeda. Similarly, among Muslim populations surveyed by Pew, Palestinians have always been the group most supportive of suicide bombings “against civilian targets in order to defend Islam from its enemies.” These kinds of views are also reflected in the hate-filled sermons that are delivered fairly regularly at the Al-Aqsa mosque, including rants that anticipate Islam’s conquest of Europe and America.

One would expect a professional Middle East analyst like Thrall to be familiar with these depressing numbers. But perhaps he thinks that the Middle East would be a better place if there was a state for people who, in the wake of 9/11, would have loved to elect bin Laden as their trusted leader and who remain highly supportive of killing civilians “in order to defend Islam from its enemies.”

Personally, I would be overjoyed if someone came up with a solution that would enable Israel to disentangle itself as thoroughly as possible from the Palestinian quagmire, but it is precisely Palestinian extremism that makes this so desirable and impossible at the same time.

Posted by Michael Kaplan at 4:40 PM

Hillary Clinton: You Could Put Donald Trump’s Jacksonian Supporters Into the “Basket of Deplorables.”

Hillary Clinton: You Could Put Half of Trump Supporters Into the “Basket of Deplorables.” Video and transcript. Posted by Tim Hains. Real Clear Politics, September 10, 2016. YouTube. Full transcript at Time, Mediaite. Longer video from CBS at YouTube.

HILLARY CLINTON: To be grossly generalistic, you could put half of Trump supporters into what I call the “Basket of Deplorables.”

Right? The racists, sexists, homophobic, xenophobic, Islamophobic, you name it...

Israeli Prime Minister: Ethnic Cleansing for Peace Is Absurd, Settlements Are Not Obstacle to Agreement with Palestinians (VIDEO). By Barney Breen-Portnoy. The Algemeiner, September 9, 2016.

I’m sure many of you have heard the claim that Jewish communities in Judea Samaria, the West Bank, are an obstacle to peace.

I’ve always been perplexed by this notion.

Because no one would seriously claim that the nearly two million Arabs living inside Israel – that they’re an obstacle to peace. That's because they aren’t. On the contrary.

Israel’s diversity shows its openness and readiness for peace. Yet the Palestinian leadership actually demands a Palestinian state with one pre-condition: No Jews.

There’s a phrase for that: It’s called ethnic cleansing.

Some otherwise enlightened countries even promote this outrage.

Ask yourself this: Would you accept ethnic cleansing in your state? A territory without Jews, without Hispanics, without blacks? Since when is bigotry a foundation for peace?

At this moment, Jewish schoolchildren in Judea Samaria are playing in sandboxes with their friends.
Does their presence make peace impossible?

I don’t think so.

I envision a Middle East where young Arabs and young Jews learn together, work together, live together side by side in peace.

So the next time you hear someone say Jews can’t live somewhere, let alone in their ancestral homeland, take a moment to think of the implications.

Ethnic cleansing for peace is absurd.

It’s about time somebody said it.