Uh Oh, Benghazi Might Actually Be A Scandal. By Walter Russell Mead.

Is Russia Kicking Dirt in John Kerry’s Face? By Walter Russell Mead. Via Meadia, May 11, 2013.
Posted by Michael Kaplan at 6:27 PM

The Donkey of the Messiah. By Uri Avnery.

Jane’s a flapper. That is a quaint, old-fashioned term, but I hope you remember its meaning. As you can tell by her appellation, Jane is 19. If she were 29, she would be Dorothy; 39, Doris; 49, Elaine; 59, Jane again — and so on around. This Jane, being 19, is a flapper, though she urgently denies that she is a member of the younger generation. The younger generation, she will tell you, is aged 15 to 17; and she professes to be decidedly shocked at the things they do and say. This is a fact which would interest her minister, if he knew it – poor man, he knows so little! For he regards Jane as a perfectly horrible example of youth – paint, cigarettes, cocktails, petting parties–oooh! Yet if the younger generation shocks her as she says, query: how wild is Jane?

Before we come to this exciting question, let us take a look at the young person as she strolls across the lawn of her parents’ suburban home, having just put the car away after driving sixty miles in two hours. She is, for one thing, a very pretty girl. Beauty is the fashion in 1925. She is frankly, heavily made up, not to imitate nature, but for an altogether artificial effect—pallor mortis, poisonously scarlet lips, richly ringed eyes—the latter looking not so much debauched (which is the intention) as diabetic. Her walk duplicates the  swagger supposed by innocent America to go with the female half of a Paris Apache dance. And there are, finally, her clothes.

These were estimated the other day by some statistician to weigh two pounds. Probably a libel; I doubt they come within half a pound of such bulk. Jane isn’t wearing much, this summer. If you’d like to know exactly, it is: one dress, one step-in, two stockings, two shoes.

“Jane,” say I, “I am a reporter representing American inquisitiveness. Why do all of you dress the way you do?”

“I don’t know,” says Jane. This reply means nothing: it is just the device by which the younger generation gains time to think. Almost at once she adds: “The old girls are doing it because youth is. Everybody wants to be young, now—though they want all us young people to be something else. Funny, isn’t it?”

“In a way,” says Jane, “it’s just honesty. Women have come down off the pedestal lately. They are tired of this mysterious feminine-charm stuff. Maybe it goes with independence, earning your own living and voting and all that. There was always a bit of the harem in that cover-up-your-arms-and-legs business, don’t you think?”

“Women still want to be loved,” goes on Jane, warming to her theme, “but they want it on a 50-50 basis, which includes being admired for the qualities they really possess. Dragging in this strange-allurement stuff doesn’t seem sporting. It’s like cheating in games, or lying.”

“Ask me, did the War start all this?” says Jane helpfully. “The answer is, how do I know? How does anybody know?”

“I read this book whaddaya-call-it by Rose Macaulay, and she showed where they’d been excited about wild youth for three generations anyhow—since 1870. I have a hunch maybe they’ve always been excited.”

“Somebody wrote in a magazine how the War had upset the balance of the sexes in Europe and the girls over there were wearing the new styles as part of the competition for husbands. Sounds like the bunk to me. If you wanted to nail a man for life I think you’d do better to go in for the old-fashioned line: ‘March me to the altar, esteemed sir, before you learn whether I have limbs or not.’ Of course, not so many girls are looking for a life meal-ticket nowadays. Lots of them prefer to earn their own living and omit the home-and-baby act. Well, anyhow, postpone it years and years. They think a bachelor girl can and should do everything a bachelor man does.”

“It’s funny,” says Jane, “that just when women’s clothes are getting scanty, men’s should be going the other way. Look at the Oxford trousers —as though a man had been caught by the ankles in a flannel quicksand.”

Do the morals go with the clothes? Or the clothes with the morals? Or are they independent? These are questions I have not ventured to put to Jane, knowing that her answer would be “so’s your old man.” Generally speaking, however, it is safe to say that as regards the wildness of youth there is a good deal more smoke than fire. Anyhow, the new Era of Undressing, as already suggested, has spread far beyond the boundaries of Jane’s group. The fashion is followed by hordes of unquestionably monogamous matrons, including many who join heartily in the general ululations as to what young people are coming to. Attempts to link the new freedom with prohibition, with the automobile, the decline of Fundamentalism, are certainly without foundation. These may be accessory, and indeed almost certainly are, but only after the fact.

That fact is, as Jane says, that women to-day are shaking off the shreds and patches of their age-old servitude. “Feminism” has won a victory so nearly complete that we have even forgotten the fierce challenge which once inhered in the very word. Women have highly resolved that they are just as good as men, and intend to be treated so. They don’t mean to have any more unwanted children. They don’t intend to be debarred from any profession or occupation which they choose to enter. They clearly mean (even though not all of them yet realize it) that in the great game of sexual selection they shall no longer be forced to play the role, simulated or real, of helpless quarry. If they want to wear their heads shaven, as a symbol of defiance against the former fate which for three millennia forced them to dress their heavy locks according to male decrees, they will have their way. If they should elect to go naked nothing is more certain than that naked they will go, while from the sidelines to which he has been relegated mere man is vouchsafed permission only to pipe a feeble Hurrah!


Flapper Jane: Your Gateway to the Roaring Twenties website.

How the Flapper Represented an Initial Movement Toward Postmodernism. By Claire Jones. 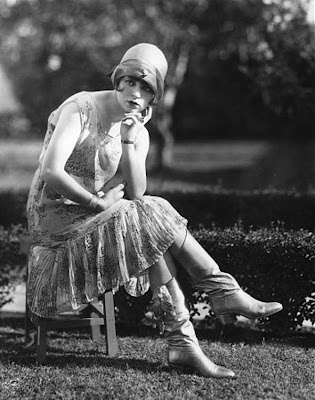 Posted by Michael Kaplan at 5:01 PM

Today we learned that our government targeted and harassed conservative Americans who simply wanted to be involved in the national discussion. Is it any wonder why Americans are so distrustful of D.C.? I’m sure President Obama is grateful for all the help the IRS gave his reelection campaign, but, still, you have to wonder how the bureaucrats who tried to pull this off can sleep at night.

So many Americans knew this was happening, but many felt defenseless and even helpless against a government that seems to roll along without accountability or sense of obligation to the people it’s supposed to serve. These Americans were mocked for being concerned about this, but now we see light shining on the truth, finally.

This IRS revelation is another step in the unraveling of the Obama administration’s self-proclaimed “hope and change.” Between the Benghazi cover-up and the IRS targeting Obama’s political opponents, we see the corruption at the heart of big government.

Americans should remember that this same corrupt IRS will be in charge of enforcing Obamacare. And this same inept and corrupt government will supposedly secure our now unsecured borders in advance of immigration reform and will implement a completely ethical and non-political IPAB panel to make life and death health care decisions for you and your family. Forgive me for not trusting these big government promises any more than I trust the White House’s latest Benghazi spin or the IRS’ fairness.

Despite all of this, I still believe that this “fundamental transformation of America” is temporary. This attempted transformation into a disheartened, weakened, unrecognizable nation is so far below anything Americans deserve. It becomes permanent only if we throw up our hands and surrender to the corruption and cover-ups.

We must demand more light shine on all that’s transpiring in D.C.’s self-absorbed bubble. On the IRS scandal, we must have accountability and a full investigation. On Benghazi, Speaker Boehner must create a Select Committee with full investigative and subpoena authority to get to the bottom of the cover-up. Keep the faith, friends.

We are the light of the world

Palestinian Leaders Tell Their Own People What They Really Mean. By William A. Jacobson.

Palestinian leaders tell their own people what they really mean. By William A. Jacobson. Legal Insurrection, May 9, 2013.

Senior PA official: “If we had a nuke, we’d have used it this very morning.” Palestinian Media Watch, May 8, 2013. YouTube.