Aya’s Story: A 20-Year Old Iraqi Refugee Who Wants to Come to America.

Aya Abdullah, a refugee fleeing war in Iraq and Syria, tells Fareed her harrowing story. They are joined by Brandon Stanton, creator of the Humans of New York blog which featured her story.

Aya Abdullah, an Iraqi interpreter, became a refugee at the age of 14. After her family received threats, they moved from their home in Iraq to Syria. Now, they live in Turkey after leaving Syria to escape the war.

Abdullah’s story spread across social media after she worked with Brandon Stanton, the photographer for the popular “Humans of New York” blog, as he documented the stories of refugees in Turkey and Jordan. She recently joined the NewsHour’s Hari Sreenivasan for a Skype conversation.

Without citizenship, her family’s options are limited, she said. She cannot get a degree or find another job. And as more and more refugees arrive daily in Turkey, prejudice against them has increased, she said. “We’ve had to switch apartments four times because our landlord decided that Arabic people are no longer allowed,” she told Stanton.

Abdullah described about her family’s process of applying for resettlement through the UNHCR to Sreenivasan. The process is lengthy and involves multiple interviews and months of waiting. Abdullah’s family did two interviews with UNHCR, then two with ICMC, over the course of four and a half years.

A petition to bring her to the U.S. has garnered more than 800,000 signatures so far.

We’re currently in the middle of a series about a young Iraqi refugee named Aya. As many of you know, Aya’s story does not yet have a happy ending. After years of hardship, her application for resettlement in the United States was rejected. She has just begun an appeal process. As we learn the rest of the story, if you feel inclined to lend your voice in support of her appeal, I have created a petition for that purpose. It’s not a petition, actually. We’re not asking that any action be taken. It’s an invitation. It’s an invitation for President Obama to join us in saying: “Aya is important to us. We do not believe she is a threat. And we think she deserves to be here.” When I read the language of our invitation to Aya last night on Skype, she began sobbing. She has been carrying her story alone for years, and she had almost given up hope. And now someone cares. Aya is sleeping now. But when she wakes up tomorrow, I hope she sees just how many of us care.

Let’s Bring Aya to America. Petition to President Obama by the Friends of Aya. Change.org.

HARI SREENIVASAN: To escape, Aya’s family fled to Syria, but, within a year, war found them again, and they fled to Turkey. Her father has now disappeared, leaving Aya to take care of her three siblings and her shell-shocked mother.

Aya applied for refugee status four years ago, went through all the interviews, in hopes that she could start over in the United States. In September, Aya was told she and her family would be accepted into the United States.

We spoke to her via Skype.

AYA ABDULLAH, Refugee: We were dancing, all the family, and doing some music, because we just tell ourselves that we are going to go to a new life, a new country. We start to just — to be ready to go. And we just, like, buy new things to have it with us and everything.

HARI SREENIVASAN: But that joy was short-lived.

So, you had your bags packed. And then what happened?

And what happened, that, in December, we just get the message that we just have — rejected from America. That’s it. That’s feel that you just build dreams, and there’s someone come and destroy that.

HARI SREENIVASAN: Her rejection letter offers no specific reason why. Aya is appealing. She understands that there is currently a fear in the United States of refugees from Syria.

AYA ABDULLAH: We’re not dangerous. We just escaped from wars to go to a safer place. We’re not going to do something bad in your country.

But I hope that — as a refugee, I told the people that Muslim people and Arabic people and refugees are not bad people. This is the message that I want to give.


Aya In Her Own Words. Humans of New York:

When I was a baby I came very close to dying. I’m not sure how to say the name of the disease in English, but all the water in my body started to dry. I couldn’t gain weight and I became very weak. This was during Saddam’s time, and the hospital staff told my mother that in two days they would euthanize me. But my mother refused to accept this. She called everywhere and found a clinic in Jordan that said they could give me treatment. There was an American doctor there who saved my life. We stayed in Jordan until I was seven, and then we moved back to Baghdad. One day I was playing in our garden and I heard very loud noises and the sky was really red and everyone was screaming. It’s very hard to describe. It was like there was blood in the sky. 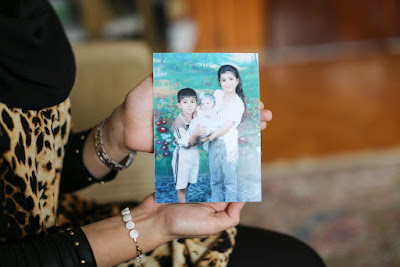 This is a photo of me right before the war came. Maybe my parents knew the war was coming, but they didn’t tell me. I wouldn’t have understood. I didn’t even know the meaning of war. Bombs started falling all around us. We lived very near one of Saddam’s castles. My mother told us: “It will be very loud, but nothing bad will happen to us. We will all be here together.” Many houses in our neighborhood were destroyed, but I’d close my ears and sing songs whenever the bombs came close. In the cartoon shows, the good always wins, so I thought that we were good and nothing would happen to us. Then one day I heard a big sound and I saw that my best friend Miriam’s house had been destroyed. We walked to school together every day. I went to see if she was OK and I saw Miriam on the ground. She didn’t have any legs and she was screaming and I can still hear that sound now. They pulled me away but I saw everything. I don’t think it was good for a child to see this.

After Miriam died, I began to have silly thoughts. I thought that I was supposed to be President of the World. It sounds funny now but I was just ten years old. I thought that if I was really clever in school and got all the best marks, I would become a leader and I could stop the war. I could just tell everyone to love each other and they would listen to me. I taught myself English during this time. I would listen to American songs and translate every word. I’d watch Hollywood movies. I’d practice talking to myself in front of the mirror every night. I’d even give gum to American soldiers so I could have conversations with them. I thought maybe if I just concentrated on my studies, I could avoid the war. It worked for two years. But one day I was driving with my father and a car bomb exploded ahead of us. I got out of the car because I thought that maybe I could save the people but there were hands and heads in the street. Everyone was dead. It was like a horror movie. It was like Titanic but it was really happening and it was in the street. 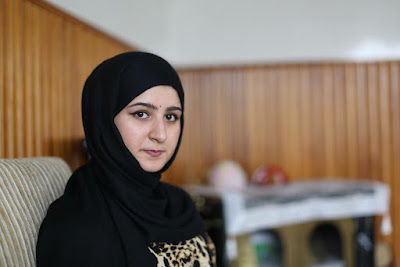 These things are very hard for me to remember, but I try not to cry because I want to be strong for my mother. It was hardest for her because she had children. During the war she had to worry about herself, but she also had to worry about us. It made her very ill. Her blood pressure is very high now. Her hand shakes. She has bladder problems. But she is my hero because she always protected us. One time when my father wasn’t home, a strange man entered our house. But my mother pretended to be a man and screamed downstairs in a very deep voice. And she saved us.

I was very moved by Aya’s story, by the hardships she has endured, by her resilience, her beautiful spirit, and her desire for a better life. Yet the cynical—realistic?—side of me asks: What if Aya is another Tashfeen Malik? What if she is an ISIS agent who wants to bring death and destruction to America? This is a question many Americans will ask.

I believe Brandon Stanton is probably right, that Aya is probably not a threat to the security of the United States. Is hope stronger than fear? Abraham Lincoln called upon us to listen to the better angels of our nature. If we are to honor the best of our history and heritage, we should embrace refugees like Aya. We would be accepting the risk that a small number of the refugees might be jihadists, like Tashfeen Malik, who will commit acts of terror on our soil and murder our fellow citizens. But the vast majority, like Aya, will embrace America, building lives for themselves that fulfill the American Dream, strengthen the fabric of our nation, and add to America’s greatness.

Is this a risk worth taking?

Posted by Michael Kaplan at 8:52 PM